One of Bo’s favorite things to do is sit in a chair in the sky. She loves going into the tube, watching movies, enjoying snacks, viewing clouds and skylines and then, when the door opens up, ta da, she is in a whole other place. So cool. She is very excited that now there is internet on planes, so she can surf and fly at the same time. Its a little bit different than what Felittle Scott does. He surfs and flies a kite at the same time. That’s pretty cool too. Felittle People had a little bit of a fear of flying, but meditation cleared that up. Now Felittle People fly Zen. Yup. 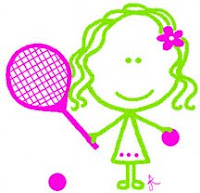 Felittle People don’t wear pink and green just to look Lily… They don’t go to Wimbledon just for the strawberries and cream… They don’t sport visors just to be hip and cute… They actually love tennis! Felittle People have been fans since the days of Ivan, Bjorn, Chris and Martina. They always have an extra racquet on hand, just in case the occasion to hit balls around pops up. You can recognize them because they wear the socks with the little balls in the back. It really makes no difference which court they play on as long as they get to play (although being at the country club is nice since they can visit the snack bar afterward and lounge by the pool.)  Even though Mac tended to be quite a brat- throwing his racquet around and screaming, good came out of it because he taught Felittle tennis players how not to behave! They are always good sports and shake hands no matter who wins! Indeed. 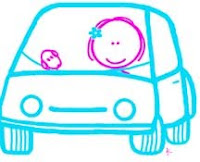 Lately, Felittle People have noticed that many drivers seem to have ants in their pants. Is there a White Rabbit epidemic sweeping Southern California? Felittle People are puzzled. Maybe its just poor time management skills that is causing everyone to be in such a rush. Well, in addition to being environmentally conscious (which is why Felittle People drive earth friendly vehicles) they also are well schooled in how to be helpful citizens. Just the other day, Chai was driving her Prius along a strip of Sunset where she knows motorcycle coppers have a stakeout. Mr. Tailgater, however, was not so well informed. In being a mindful driver, Chai was cruising along at the posted 35 mph, but even more importantly, she was being a good citizen by saving Mr. T money, aggravation and time in court. Sadly, Mr. T was unaware of the Felittle Way so he zig-zagged and sped off, only to get busted seconds later. Bugger.

Felittle Bo is going to the land of The Celtics, even though the Laker People might disapprove. Its always good to venture into unknown worlds and see what’s there. Sometimes Felittle People like a new city much more than expected, other times not so much. But, regardless, exploring new worlds is what being Felittle is all about. Plus, its always a blessing to meet other Felittle People who are trying to make the world a better place. Bo is excited to visit Harvard’s campus, see her first Sox game at Fenway and experience Cape Cod. She is now a vegetarian so she is looking forward to eating Clam Chowder instead of Beef Bourguignon. Maybe in honor of America’s history she will even have a Felittle Tea Party! She hopes that the scones are as good as the ones at World Café. Yum.

Felittle People love love love going to the Farmer’s Market in Santa Monica on Sundays. Its probably their favorite place on earth (next to the Hollywood Bowl). It makes them even more happy than they already are (which almost seems impossible!) There is so much going on at the SMFM: live music, art displays, pony rides, kiddos running everywhere… there is even a bike valet and a dog sitter!  Its the best place to get produce and flowers and have a picnic on the grass. Sometimes you run into old Felittle friends which is always a treat except when they fall off their skateboard and scrape their elbow. Ouch.

Bo and Felittle Sue went to lunch at the new Spumoni Restaurant in Brentwood and then to Yogurtland for self-serve yogurt. Felittle Sue showed what good karma she has when she didn’t get a parking ticket AND when she found her purse untouched after she accidentally left it in the restaurant. Its not surprising, really, that Felittle People have such good karma because they spread happiness wherever they go! In fact, just the other day, a bamboo plant fell right on top of Bo and she exclaimed with delight, “Good luck always falls on me!” See.

Cyan went to the Clippers game at the Staples center with Felittle Jim. The Trailblazers won by 2 points. Darn. But the good news is she found 28 cents and had a caramel sundae! Yay!