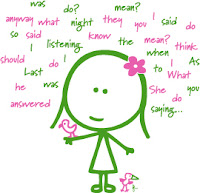 When posed with the question, “Who is a polluter?” the first thing that may come to a Felittle Person’s mind is a non-Prius driver. Because after all, those people are polluting a little more than necessary. Or perhaps, a polluter could be someone who drops her gum wrapper on the sidewalk, instead of putting it in a trash bin. (Felittle People are big fans of Singapore.) Or worse yet, smokers. These folks are double polluters because they not only clog their lungs with yuk, but their butts clog up perfectly clean streets all around the world.

Recently, Felittle People discovered that a whole different sort of polluters exist. People do not actually have to cause smog or litter to pollute, they can pollute with words.

Word polluters, as it turns out, come in all different forms. There are Yellers, who misuse words in anger and launch their most destructive words into the air, which gain speed and power before landing on perfectly reasonable and often unsuspecting Felittle People. There are Babblers who are completely unaware that they are verbally monopolizing the airspace or holding their audience hostage by their rambling monologues or hypnotizing Felittle People into a foggy word coma. There are the Repeaters, who never seem to be able to say things just once, but need to emphasize the same point ad nauseum, in case the listener didn’t get it the first 150,000 times. And lastly, there are the Filterless, who for some reason weren’t taught, or forgot, that every thought that pops into their head is not worth mentioning.

Of course, word polluters, have no clue that they are indeed causing pollution. In fact, at this very moment, they may be yelling, babbling or re-iterating how everyone needs to be more environmentally aware, all the while oblivious of their own destruction.

In an effort to help make the world a better place, Felittle People highly recommend reducing all forms of pollution. Every little bit helps. Less is more. Peace.